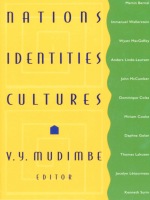 This volume investigates the concepts of nation, identity, and culture as they have evolved within the contexts of exile and as a result of the consolidation of the ethnic and the political. The contributors explore various theoretical issues involved in reconfiguring these concepts since the nineteenth century, as well as the manifestations of these issues in specific regions of the world.
Examining the degree to which twentieth-century representations of colonization, revolution, and modernity are nineteenth-century constructs, Nations, Identities, Cultures locates contemporary political thought in an ethos of exile, nostalgic for bygone places and cultures of the nineteenth century. The contributors interrogate the significance of changes in the way the political is conceptualized and the impact of shifting representations of political society on our understanding of nation, identity, and culture. Approaches to these issues range from broad perspectives on global culture, civil society, liberalism, and dialectical identity to specific case studies on the politics of Quebec, the Russian muzhik, Israel’s borders, the ancient Greek origins of European culture, Kongo nationalism, the women of Lebanon, and the Danish/Swedish border.

V. Y. Mudimbe is William Rand Kenan, Jr. Professor of French, Comparative Literature, and Classics at Stanford University. He is also Distinguished Research Professor in the Graduate Program in Literature at Duke University.

Race, Class, and Gender in the Formation of the Aryan Model of Greek Origins / Martin Bernal 7

Civil Society: From Utopia to Management, from Marxism to Anti-Marxism / Dominique Colas 29

Between Universalism and Particularism: The "Border" in Israeli Discourse / Daphna Golan 75

The Ethnicization of Nations: Russia, the Soviet Union, and the People / Thomas Lahusen 123

Small Differences—Large Issues: The Make and Remaking of a National Border / Anders Linde-Laursen 143

The Insurmountable Contradictions of Liberalism: Human Rights and the Rights of Peoples in the Geoculture of the Modern World-System / Immanuel Wallerstein 181

On Producing the Concept of a Global Culture / Kenneth Surin 199