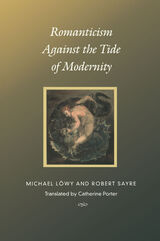 Romanticism is a worldview that finds expression over a whole range of cultural fields—not only in literature and art but in philosophy, theology, political theory, and social movements. In Romanticism Against the Tide of Modernity Michael Löwy and Robert Sayre formulate a theory that defines romanticism as a cultural protest against modern bourgeois industrial civilization and work to reveal the unity that underlies the extraordinary diversity of romanticism from the eighteenth to the twenty-first century.
After critiquing previous conceptions of romanticism and discussing its first European manifestations, Löwy and Sayre propose a typology of the sociopolitical positions held by romantic writers-from “restitutionist” to various revolutionary/utopian forms. In subsequent chapters, they give extended treatment to writers as diverse as Coleridge and Ruskin, Charles Peguy, Ernst Bloch and Christa Wolf. Among other topics, they discuss the complex relationship between Marxism and romanticism before closing with a reflection on more contemporary manifestations of romanticism (for example, surrealism, the events of May 1968, and the ecological movement) as well as its future.
Students and scholars of literature, humanities, social sciences, and cultural studies will be interested in this elegant and thoroughly original book.
AUTHOR BIOGRAPHY

Robert Sayre is Professor of Anglophone Literatures at the University of Marne-la-Vallée.


The Romantic Enigma, or “Tumultuous Colors”

The Concept of Romanticism


The Romantic Critique of Modernity


The Genesis of the Phenomenon


Outline of a Typology


Hypotheses for a Sociology of Romanticism

4. Visages of Romanticism in the Nineteenth Century


Romanticism and the French Revolution: The Young Coleridge


Romanticism and the Industrial Revolution: The Social Critique of John Ruskin


5. Visages of Romanticism in the Twentieth Century


Romanticism and Religion: The Mystical Socialism of Charles Peguy


Romanticism as a Feminist Vision: The Quest of Christa Wolf

6. The Fire Is Still Burning: From Surrealism to the Present Day and


The Contemporary Romantic Critique of Civilization


What Future for Romanticism?