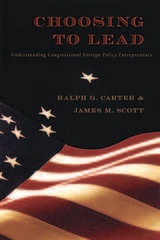 Carter and Scott combine extensive quantitative analysis, interviews with members of Congress and their staff, and case studies of key foreign policy entrepreneurs, including Frank Church, William Fulbright, Jesse Helms, Edward Kennedy, Pat McCarran, and Curt Weldon. Drawing on their empirical data, the authors identify the key variables in foreign policy entrepreneurship, including membership in the Senate or House, seniority and committee assignments, majority or minority party status, choice of foreign policy issues, and the means used to influence policy. By illuminating the roles and impact of individual members of Congress, Carter and Scott contribute to a more nuanced understanding of the broader U.S. foreign policy-making process.

Ralph G. Carter is Professor and Chair of the Department of Political Science at Texas Christian University. He is a co-author of Making American Foreign Policy and the editor of Contemporary Cases in U.S. Foreign Policy: From Terrorism to Trade.

REVIEWS
“I now see the foreign policy-making process in a different light than I did before reading Choosing to Lead. Ralph G. Carter and James M. Scott show that Congress can and regularly does play an important role in foreign policy making. In the future, foreign-policy analysts will have to consider that role rather than assume that only the Oval Office matters.”—A. Cooper Drury, author of Economic Sanctions and Presidential Decisions: Models of Political Rationality

1. Beyond the White House: Bringing Congress into the Foreign Policy Picture 1

8. Part of the Landscape: Conclusions on the Entrepreneur Effect 221