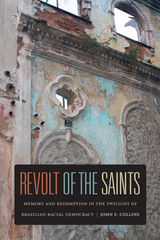 In 1985 the Pelourinho neighborhood in Salvador, Brazil was designated as a UNESCO World Heritage Site. Over the next decades, over 4,000 residents who failed to meet the state's definition of "proper Afro-Brazilianness" were expelled to make way for hotels, boutiques, NGOs, and other attractions. In Revolt of the Saints, John F. Collins explores the contested removal of the inhabitants of Brazil’s first capital and best-known site for Afro-Brazilian history, arguing that the neighborhood’s most recent reconstruction, begun in 1992 and supposedly intended to celebrate the Pelourinho's working-class citizens and their culture, revolves around gendered and racialized forms of making Brazil modern. He situates this focus on national origins and the commodification of residents' most intimate practices within a longer history of government and elite attempts to "improve" the citizenry’s racial stock even as these efforts take new form today. In this novel analysis of the overlaps of race, space, and history, Collins thus draws on state-citizen negotiations of everyday life to detail how residents’ responses to the attempt to market Afro-Brazilian culture and reimagine the nation’s foundations both illuminate and contribute to recent shifts in Brazil’s racial politics.
AUTHOR BIOGRAPHY
John F. Collins is Associate Professor of Anthropology at Queens College and the Graduate Center, City University of New York.
REVIEWS
-- Elina I. Hartikainen Journal of Latin American and Caribbean Anthropology

Introduction: Being, through the Archive  1

1. "The Eighteenth Battalion of Love": Failure and the Dissemination of Misinterpretation  44

3. Prostitution's Bureaucracy: Making Up People in the "City of Women"  141

4. A Metaphysics for Our Time: Pelourinho Properties, Bahian Social Bodies, and the Shifting Meanings of Rams and Fetuses  181

6. "But Madame, What If I Should Need to Defecate in Your Neighborhood?"  266