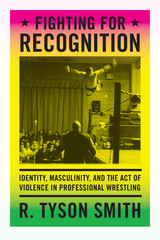 In Fighting for Recognition, R. Tyson Smith enters the world of independent professional wrestling, a community-based entertainment staged in community centers, high school gyms, and other modest venues. Like the big-name, televised pro wrestlers who originally inspired them, indie wrestlers engage in choreographed fights in character. Smith details the experiences, meanings, and motivations of the young men who wrestle as "Lethal" or "Southern Bad Boy," despite receiving little to no pay and risking the possibility of serious and sometimes permanent injury. Exploring intertwined issues of gender, class, violence, and the body, he sheds new light on the changing sources of identity in a postindustrial society that increasingly features low wages, insecure employment, and fragmented social support. Smith uncovers the tensions between strength and vulnerability, pain and solidarity, and homophobia and homoeroticism that play out both backstage and in the ring as the wrestlers seek recognition from fellow performers and devoted fans.
AUTHOR BIOGRAPHY
R. Tyson Smith is Visiting Assistant Professor of Sociology at Brown University.
REVIEWS
-- E. J. Staurowsky Choice


-- Bruce Lee Hazelwood International Review for the Sociology of Sport

2. Fighting for a Pop: Wrestler Recognition 37