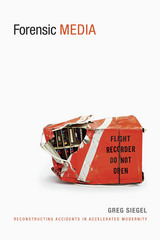 In Forensic Media, Greg Siegel considers how photographic, electronic, and digital media have been used to record and reconstruct accidents, particularly high-speed crashes and catastrophes. Focusing in turn on the birth of the field of forensic engineering, Charles Babbage's invention of a "self-registering apparatus" for railroad trains, flight-data and cockpit voice recorders ("black boxes"), the science of automobile crash-testing, and various accident-reconstruction techniques and technologies, Siegel shows how "forensic media" work to transmute disruptive chance occurrences into reassuring narratives of causal succession. Through historical and philosophical analyses, he demonstrates that forensic media are as much technologies of cultural imagination as they are instruments of scientific inscription, as imbued with ideological fantasies as they are compelled by institutional rationales. By rethinking the historical links and cultural relays between accidents and forensics, Siegel sheds new light on the corresponding connections between media, technology, and modernity.
AUTHOR BIOGRAPHY
Greg Siegel is Associate Professor of Film and Media Studies at the University of California, Santa Barbara.
REVIEWS
"Siegel’s thoroughly researched and beautifully written book is essential reading for anyone concerned with how media help us construct and imagine both what has happened in the past and what might happen in the future."