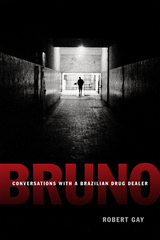 In the 1980s a poor farmer's son from Recife, Brazil, joined the Brazilian navy and began selling cocaine. After his arrest in Rio de Janeiro he spent the next eight years in prison, where he joined the Comando Vermelho criminal faction and eventually became one of its leaders. Robert Gay tells this young man's dramatic and captivating story in Bruno. In his shockingly candid interviews with Gay, Bruno provides many insights into the criminal world in which he lived: details of day-to-day prison life; the inner workings of the Brazilian drug trade; the structure of criminal factions; and the complexities of the relationships and links between the prisons, drug trade, gangs, police, and favelas. And most stunningly, Bruno's story suggests that Brazilian mismanagement of the prison system directly led to the Comando Vermelho and other criminal factions' expansion into Rio's favelas, where their turf wars and battles with police have terrorized the city for over two decades.
AUTHOR BIOGRAPHY
Robert Gay is Professor of Sociology at Connecticut College. He is the author of Lucia: Testimonies of a Brazilian Drug Dealer's Woman and Popular Organization and Democracy in Rio De Janeiro: A Tale of Two Favelas.
REVIEWS
“This particular account is interesting and engaging…”

"The real contribution of Bruno [is]... the private reflections that we gain from a single informant who is intelligent, critical, and painfully idealistic. It is this personal voice, rather than the empirical data, that makes Bruno truly special, and a necessary supplement for scholars interested not only in drug trafficking and prisons, but in the relationship between crime and self-reflection as well."

“In telling the story of Bruno, sociologist Robert Gay succeeds in demystifying not only gangs and the drug trade but also an entire country. This is a carefully crafted study of a criminal career embedded in a society that for generations has denied citizenship to large numbers of its population…. This is an important book that skilfully utilises ethnographic interviews to tell the story of one man in the trenches of the global war against drugs.”

"This gripping book is a superb entry point into the maze of Brazilian prisons and, hopefully, a spur to more systematic historical research into the country’s current dilemmas with prisons, drugs, and gangs."

"From the haunting cover to the emotional ending Bruno: Conversations with a Brazilian Drug Dealer shapes up to be a gripping read for anyone interested in the shady underworld of drug gang culture. . . . Bruno is a fascinating account that will serve as a useful testament of life in the Brazilian underworld which will be of immense value to students of cultural studies and Latin American history for years to come. In that sense, Bruno is strictly not the sensationalised bestseller that the story has the potential to be, but something infinitely more valuable."

"Robert Gay has written an intimate, eye-opening book that opens a window into the politics of prisons and drug prohibition in Brazil."

"Stirring. . . . Gay offers a finely grained ethnographic account of an individual whose life is embedded in a complex world of drug trafficking complicities."