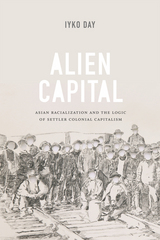 In Alien Capital Iyko Day retheorizes the history and logic of settler colonialism by examining its intersection with capitalism and the racialization of Asian immigrants to Canada and the United States. Day explores how the historical alignment of Asian bodies and labor with capital's abstract and negative dimensions became one of settler colonialism's foundational and defining features. This alignment allowed white settlers to gloss over and expunge their complicity with capitalist exploitation from their collective memory. Day reveals this process through an analysis of a diverse body of Asian North American literature and visual culture, including depictions of Chinese railroad labor in the 1880s, filmic and literary responses to Japanese internment in the 1940s, and more recent examinations of the relations between free trade, national borders, and migrant labor. In highlighting these artists' reworking and exposing of the economic modalities of Asian racialized labor, Day pushes beyond existing approaches to settler colonialism as a Native/settler binary to formulate it as a dynamic triangulation of Native, settler, and alien populations and positionalities.
AUTHOR BIOGRAPHY
Iyko Day is Associate Professor of English at Mount Holyoke College.
REVIEWS
-- Kevin Bruyneel Theory & Event

Introduction. The New Jews: Settler Colonialism and the Personification of Capitalism  1

1. Sex, Time, and the Transcontinental Railroad: Abstract Labor and the Queer Temporalities of History 2  41

3. Japanese Internment and the Mutation of Labor  115

4. The New Ninteteenth Century: Neoliberal Borders, the City, and the Logic of Settler Colonial Capitalism  151

Epilogue. The Revenge of the Iron Chink  191