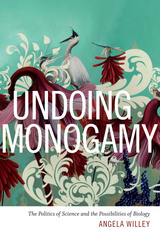 In Undoing Monogamy Angela Willey offers a radically interdisciplinary exploration of the concept of monogamy in U.S. science and culture, propelled by queer feminist desires for new modes of conceptualization and new forms of belonging. She approaches the politics and materiality of monogamy as intertwined with one another such that disciplinary ways of knowing themselves become an object of critical inquiry. Refusing to answer the naturalization of monogamy with a naturalization of nonmonogamy, Willey demands a critical reorientation toward the monogamy question in the natural sciences, social sciences, and humanities. The book examines colonial sexual science, monogamous voles, polyamory, and the work of Alison Bechdel and Audre Lorde to show how challenging the lens through which human nature is seen as monogamous or nonmonogamous forces us to reconsider our investments in coupling and in disciplinary notions of biological bodies.
AUTHOR BIOGRAPHY
Angela Willey is Assistant Professor of Women, Gender, Sexuality Studies at the University of Massachusetts, Amherst.
REVIEWS
-- Kim TallBear Hypatia

Introduction. Politics and Possibility: A Queer Feminist Introduction to Monogamy  1

2. Making the Monogamous Human: Mating, Measurement, and the New Science of Bonding  45

3. Making Our Poly Nature: Monogamy's Inversion and the Reproduction of Difference  73

Epilogue. Dreams of a Dyke Science  141