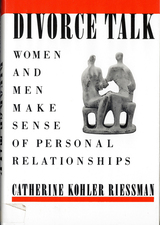 Divorce Talk: Women and Men Make Sense of Personal Relationships
by Catherine Kohler Riessman
Rutgers University Press, 1990
Paper: 978-0-8135-1503-8
Taking a new look at divorce in America, Catherine Reissman shows how divorce is socially shared, and how it takes crucially different forms for women and men. Drawing on interviews with adults who are divorcing, she treats their accounts as texts to be interpreted, as templates for understanding contemporary beliefs about personal relationships.
Riessman looks at the ideology of the companionate marriage: husband and wife should be each other's closest companion, and in marriage one should achieve emotial intimacy and sexual fulfillment. These beliefs imply a level of equality that rarely exists. In reality, most wives are subordinate to their husbands, most husbands want neither "deep talk" nor small talk that women want, and many husbands resent their wife's ties to kin and friends. To explain divorce, women and men construct gendered visions of what marriage should provide, and at the same time they mourn gender divisions and blame their divorces on them. Riessman examines the stories people tell about their marriages--the protagonists, inciting conditions, and culminating events--and how these narrative structures provide ways to persuade both teller and listener that divorce was justified.
Although divorce is invariably stressful, many people believe that men suffer less than women. This is an artifact of what Riessman calls the "feminization of psychological distress"--traditional ways of measuring distress reflect women's idioms, not men's. Departing from a literature that casts divorce in only negative terms, she finds paradoxically that women sense rewards, even as they report hardship. There is a shakeup in gender roles, and women more than men feel they gain a fuller idea of who they are. The author allows us to enter the points of view of her subjects, while her analytic approach makes links between the self and society.
AUTHOR BIOGRAPHY

Catherine Kohler Riessman is an associate professor in the School of Social Work at Smith College.