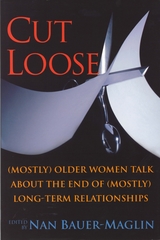 Although breakups—whether celebrity or everyday—are a constant source of fascination, surprisingly little attention has been given to women who are cut loose in their later years. This is a book about (mostly) long-term relationships that have come apart. Each woman involved, the majority of whom are over sixty, tells of her experience through journal entries, essays, poetry, or stories. Although in many senses they have been abandoned, they have also been set free, untethered, and, for some, liberated sexually, mentally, or emotionally.

The book is divided into two major sections. The pieces in the first part are personal narratives. Among the varied voices, we hear from women in both heterosexual and same-sex relationships who have been left by their partners or who have decided to leave them. In the second section, the contributors look at being left and leaving from psychological, sociological, economic, sexual, medical, anthropological, and literary perspectives. Other essays explore the shared experiences of specific classes of women, such as single women, widows, or abandoned daughters.