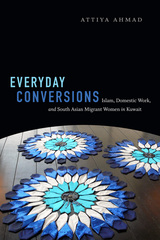 Why are domestic workers converting to Islam in the Arabian Peninsula and Persian Gulf region? In Everyday Conversions Attiya Ahmad presents us with an original analysis of this phenomenon. Using extensive fieldwork conducted among South Asian migrant women in Kuwait, Ahmad argues domestic workers’ Muslim belonging emerges from their work in Kuwaiti households as they develop Islamic piety in relation—but not opposition—to their existing religious practices, family ties, and ethnic and national belonging. Their conversion is less a clean break from their preexisting lives than it is a refashioning in response to their everyday experiences. In examining the connections between migration, labor, gender, and Islam, Ahmad complicates conventional understandings of the dynamics of religious conversion and the feminization of transnational labor migration while proposing the concept of everyday conversion as a way to think more broadly about emergent forms of subjectivity, affinity, and belonging.
AUTHOR BIOGRAPHY
Attiya Ahmad is Assistant Professor of Anthropology at The George Washington University.
REVIEWS
"[T]his study offers new insights into the inner-workings of migration and breaks from static readings of religious conversions. . . . Bridging the gap between religion and migration is an important direction in scholarship on transnationalism, and Ahmad’s work markedly joins other projects on this urgent venture."

"Everyday Conversions is a poignant and patient engagement with the gendered spaces and relations that are easy to overlook but are vital to state formation, social reproduction and religious life in multiple countries."

“An enormous contribution. Everyday Conversions will be of interest to a variety of people—those interested in Islam, migrant experiences, the Indian Ocean world, and gender studies, especially.”

“Everyday Conversions is not only a valuable addition to the growing literature on Gulf identities, but also to the wider literature on religion, belonging and identity.”

"Beautifully written . . . Attiya Ahmad’s groundbreaking research sheds light on the complex process of conversion and the ways that South Asian migrant women domestic workers in Kuwait rework their lives and reshape their sense of self and belonging."

"This beautifully written book . . . skillfully weaves together women’s stories, which are contextualized within the history of the Indian Ocean trade, the feminization of Kuwait’s labour market, and the Islamic revival movement. A
significant addition to scholarship on foreign workers in the Gulf, Attiya Ahmad’s volume adds ethnographic material that is missing from other studies: details of private religious lives."

-- Mara A. Leichtman Journal of the Royal Anthropological Institute

"Everyday Conversions was very enjoyable to read; it was very thoughtful and thought-provoking in making sure that these women spoke their own truth. . . . The book expresses the intricacies of navigating one’s conditions between doing what one must do with meeting one’s basic human needs."