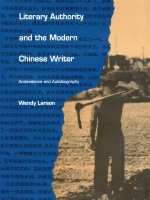 Throughout the twentieth century, Chinese writers have confronted the problem of creating a new literary tradition that both maintains the culturally unique aspects of a rich heritage and succeeds in promoting a new modernity. In the first book-length treatment of the topic, Wendy Larson examines the contradictory forms of authority at work in the autobiographical texts of modern Chinese writers and scholars and the way these conflicts helped to shape and determine the manner in which writers viewed themselves, their texts, and their work.
Larson focuses on the most famous writers associated with the May Fourth Movement, a group most active in the 1920s and 1930s, and their fundamental ambivalence about writing. She analyzes how their writing paradoxically characterized textual labor as passive, negative, and inferior to material labor and the more physical political work of social progress, and she describes the ways they used textual means to devalue literary labor.
The impact of China’s increasing contact with the West—particularly the ways in which Western notions of “individualism” and “democracy” influenced Chinese ideologies of self and work—is considered. Larson also studies the changes in China’s social structure, notably those linked to the abolition in 1905 of the educational exam system, which subsequently broke the link between the mastery of certain texts and the attainment of political power, further denigrating the cultural role of the writer.
REQUEST ACCESSIBLE FILE