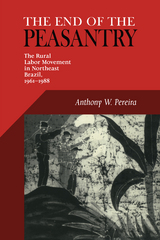 The rural labor movement played a surprisingly active role in Brazil’s transition to democracy in the 1980s.  While in most Latin American countries rural labor was conspicuously marginal, in Brazil, an expanded, secularized, and centralized movement organized strikes, staged demonstrations for land reform, demanded political liberalization, and criticized the government’s environmental policies.

In this ground-breaking book, Anthony W. Pereira explains this transition as the result of two intertwined processes - the modernization of agricultural production and the expansion of the welfare state into the countryside - and explores the political consequences of these processes, occurring not only in Latin America but in much of the Third World.