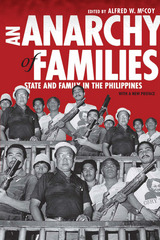 An Anarchy of Families: State and Family in the Philippines
edited by Alfred W. McCoy
University of Wisconsin Press, 2009
Paper: 978-0-299-22984-9
Winner of the Philippine National Book Award, this pioneering volume reveals how the power of the country’s family-based oligarchy both derives from and contributes to a weak Philippine state. From provincial warlords to modern managers, prominent Filipino leaders have fused family, politics, and business to compromise public institutions and amass private wealth—a historic pattern that persists to the present day.
Edited by Alfred W. McCoy, An Anarchy of Families explores the pervasive influence of the modern dynasties that have led the Philippines during the past century. Exemplified by the Osmeñas and Lopezes, elite Filipino families have formed a powerful oligarchy—controlling capital, dominating national politics, and often owning the media. Beyond Manila, strong men such as Ramon Durano, Ali Dimaporo, and Justiniano Montano have used “guns, goons, and gold” to accumulate wealth and power in far-flung islands and provinces. In a new preface for this revised edition, the editor shows how this pattern of oligarchic control has continued into the twenty-first century, despite dramatic socio-economic change that has supplanted the classic “three g’s” of Philippine politics with the contemporary “four c’s”—continuity, Chinese, criminality, and celebrity.
AUTHOR BIOGRAPHY
Alfred W. McCoy is J.R.W. Smail Professor of History at the University of Wisconsin–Madison. His books include The Politics of Heroin and A Question of Torture: CIA Interrogation from the Cold War to the War on Terror.
REVIEWS

“Rends the canopy of ‘civility’ and ‘culture’ surrounding the ruling families of the Philippines, revealing long histories of opportunism and violence.”—Patricio Abinales, KyotoUniversity