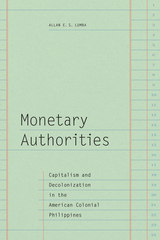 In Monetary Authorities Allan E. S. Lumba explores how the United States used monetary policy and banking systems to justify racial and class hierarchies, enforce capitalist exploitation, and counter movements for decolonization in the American colonial Philippines. Lumba shows that colonial economic experts justified American imperial authority by claiming that Filipinos did not possess the racial capacities to properly manage money. Financial independence, then, became a key metric of racial capitalism by which Filipinos had to prove their ability to self-govern. At the same time, the colonial state used its monetary authority to police the economic activities of colonized subjects and to curb movements for decolonization. It later offered a conditional form of decolonization that left the Philippines reliant on U.S. financial institutions. By showing how imperial governance was entwined with the racialization and regulation of monetary systems in the Philippines, Lumba illuminates a key mechanism through which the United States securitized the imperial world order.
AUTHOR BIOGRAPHY
Allan E. S. Lumba is Assistant Professor of History at Virginia Tech.
REVIEWS
“Monetary Authorities is a stringent, riveting account of the important role of currency controls in the expansion of US imperial rule and racial capitalism. Allan E. S. Lumba’s work incisively details how currency stabilization, economic security, financial regulation, and fiscal discipline are key normative instruments of racial subjugation, political pacification, and counter-decolonization. A crucial, powerful intervention reminding us of the politics of everyday transactions at the level of small change.”