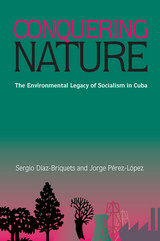 Conquering Nature provides the only book-length analysis of the environmental situation in Cuba after four decades of socialist rule, based on extensive examination of secondary sources, informed by the study of development and environmental trends in former socialist countries as well as in the developing world. It approaches the issue comprehensively and from interdisciplinary, comparative, and historical perspectives. Based on the Cuban example, Díaz-Briquets and Pérez-López challenge the concept that environmental disruption was not supposed to occur under socialism since it was alleged that guided by scientific policies, socialism could only beget environmentally benign economic development. In reality, the socialist environmental record proved to be far different from the utopian view.

Between the early 1960s and the late 1980s the environmental situation worsened despite Cuba’s achieving one of the lowest population growth rates in the world and having eliminated extreme living standard differentials in rural areas, two of the primary reasons often blamed for environmental deterioration in developing countries. The government’s approach was to “conquer nature” and under its central planning approach, it did not take local circumstances into consideration. This disregard for the environmental consequences of development projects continues to this day despite official allegations to the contrary—as the country pursues an economic survival strategy based on the crash development of the tourist sector and exploitation of natural resources. An underlying conclusion of the book is that the environmental legacy of socialism will present serious challenges to future Cuban generations.

AUTHOR BIOGRAPHY
Sergio Diaz-Briquets is executive director of the Council for Human Development and vice president of Casals & Associates, a consulting firm in the Washington, D.C. area. Previous appointments include research director of the U.S. Congressional Commission for the Study of International Migration and Cooperative Economic Development, and project director with the Population Reference Bureau. He has also been a consultant to numerous international development agencies. His books include The Health Revolution in Cuba, and Cuban Internationalism in Sub-Saharan Africa. He has a Ph.D. in demography from the University of Pennsylvania.

Jorge Pérez-López is an economist with the U. S. Department of Labor, Bureau of International Affairs. He is author of The Cuban Second Economy: From behind the Scenes to Center Stage, The Economics of Cuban Sugar, and Measuring Cuban Economic Performance, co-editor of Perspectives on Cuban Economic Reforms, and editor of Cuba at a Crossroads and is on the editorial board of Cuban Studies. He has a Ph.D. in economics from the University of New York at Albany.
TABLE OF CONTENTS
Contents
List of Tables and Maps
Preface
1. Socialism in Cuba and the Environment
2. The Natural, Demographic, and Economic Setting
3. Law and Practice of Environmental Protection
4. Agriculture and the Environment
5. Water and the Environment
6. Forestry and Agroforestry
7. Industrial Pollution
8. Nuclear Energy and the Environment
9. Regional Development and the Neglect of La Habana
10. The Special Period and the Environment
Notes
References
Index
REQUEST ACCESSIBLE FILE