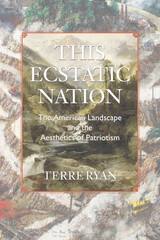 Americans’ cultural love affair with their country’s landscape started in the nineteenth century, when expansionism was often promoted as divine mission, the West was still the frontier, and scenery became the backdrop of nationalist mythology. With a promise of resources ripe for development, Manifest Destiny–era aesthetics often reinforced a system of environmental degradation while preserving the wide and wild view. Although the aesthetics have evolved, contemporary media are filled with American landscape images inspired by the nineteenth century. Terre Ryan examines this phenomenon by exploring the overlapping trails of national mythology, landscape aesthetics, patriotic discourse, and public policy. Tracing her journeys around bombing grounds in Nevada, logging sites in Oregon, and energy fields in Wyoming, she argues that business and government agencies often frame commercial projects and national myths according to nineteenth-century beliefs about landscape and bounty. Advertisements and political promotional materials following this aesthetic framework perpetuate frontier-era ideas about the environment as commodity, scenery, and cultural trashlands. Transmitted through all types of media, nineteenth-century perspectives on landscape continue to inform mainstream perceptions of the environment, environmental policies, and representations of American patriotism. Combining personal narrative with factual reportage, political and cultural critique, and historical analysis, Ryan reframes the images we see every day and places them into a larger national narrative.
AUTHOR BIOGRAPHY
Terre Ryan completed her MA in creative writing at City College of New York and her PhD in English at the University of Nevada, Reno. She is an assistant professor in the Writing Department, Loyola University Maryland.