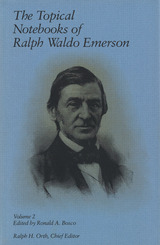 Ralph Waldo Emerson, the magus of of American Transcendentalism, was an inveterate keeper of journals and notebooks, which he used as source and proving ground for his poems, lectures, and essays.  This is the second in a three-volume edition that brings twelve of Emerson's topical notebooks and four other notebooks into print for the first time.  These notebooks were Emerson's repositories for anecdotes, quotations, reminiscences, drafts of his poems, outlines for lectures, and observations on everything from daily life to profound cultural and philosophical issues.

Among the highlights of the five notebooks in Volume 2, "Orientalist" provides an unusual opportunity to view closely Emerson's adaptation of Eastern thought.
AUTHOR BIOGRAPHY

Ronald A. Bosco is Professor of English at the State University of New York at Albany.  Among the books he has edited are volume 16 of The Journals and Miscellaneous Notebooks of Ralph Waldo Emerson, the four volumes of The Puritan Sermon in America, and volume 3 of The Complete Sermons of Ralph Waldo Emerson.