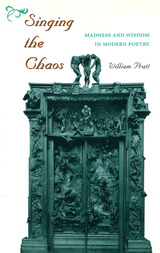 Singing the Chaos: Madness and Wisdom in Modern Poetry combines both a historical and a critical approach toward the works of major British, American, French, German, and Russian poets. Comprehensive in scope and arranged chronologically to survey a century of high poetic achievement, the study is unified by Pratt's overriding argument that "modern poets have endowed a disintegrating civilization with humane wisdom by 'singing the chaos' that surrounds them, making ours a great age in spite of itself."

In developing this central theme, Pratt brings alive the energy, the freshness, and the originality of technique that made Baudelaire, Pound, Yeats, Rilke, Eliot, and others the initiators of the revolution in poetry. He brings a more complete, clearer perspective to other major themes: modernism as an age of irony; poets as both madmen and geniuses; the modern poet as tragic hero; the dominance of religious or visionary truths over social or political issues; and the combination of radical experiments in poetic form with an apocalyptic view of Western civilization. His detailed treatment of the Fugitive poets and his recognition of their prominent role in twentieth-century literature constitute an important historical revision.

Brilliantly informed, insightful, and, above all, accurately sympathetic to the points of view of the poets Pratt presents, Singing the Chaos is that rare book that belongs on all shelves devoted to modernist poetry.

William Pratt, Professor of English at Miami University in Ohio, is the author or editor of several books, most recently Homage to Imagism.