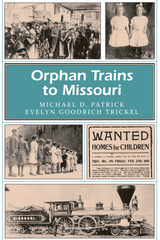 As an "orphan train" crossed the country, it left part of its cargo at each stop, a few children in one small town and a few in another. Even though farmers needed many hands for labor, most of the small farm communities could not or would not take all of the children on the train. As the train moved to its next stop, those children not taken feared no one would ever want them.

Early immigration laws encouraged the poor of Europe to find new hope with new lives in the United States. But sometimes the immigrants exchanged a bad situation in their native country for an even worse one on the streets of New York and other industrial cities. As a result, the streets were filled with crowds of abandoned children that the police called "street arabs." Many New York citizens blamed the street arabs for crime and violence in the city and wanted them placed in orphan homes or prisons.

In 1853 a man by the name of Charles Loring Brace, along with other well-to-do men in New York City, founded the Children's Aid Society. The society planned to give food, lodging, and clothing to homeless children and provide educational and trade opportunities for them. But the number of children needing help was so large that the Children's Aid Society was unable to care for them, and Brace developed a plan to send many of the children to the rural Midwest by train. He was convinced that the children of the streets would find many benefits in rural America. In 1854 he persuaded the board of the society to send the first trainload of orphans west. With this, the orphan trains were born.

Cheap fares, the central location of the state, and numerous small farming towns along the railroad tracks made Missouri the perfect hub for the orphan trains, even though many areas of the state were still largely unsettled. Researchers have estimated that from 150,000 to 400,000 children were sent out on orphan trains, with perhaps as many as 100,000 being placed in Missouri.

Orphan Trains to Missouri documents the history of the children on those Orphan Trains--their struggles, their successes, and their failures. Touching stories of volunteers who oversaw the placement of the orphans as well as stories of the orphans themselves make this a rich record of American and midwestern history.

Michael D. Patrick is Adjunct Professor of Folklore at the University of Southern Alabama and Associate Professor Emeritus at the University of Missouri-Rolla. Residing in Trenton, Missouri, Evelyn Goodrich Trickel is the coauthor of A Pictorial History of Grundy County and recipient of the Charles Loring Brace Award from the Orphan Train Heritage of America. Patrick and Trickel, along with Evelyn Sheets, coauthored We Are Part of History: The Story of Orphan Trains.