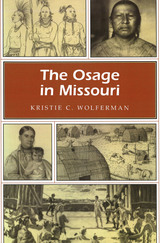 On November 10, 1808, the American militia and the chiefs from the Little Osage and Big Osage nations celebrated. Fort Osage, built on a Missouri River bluff 250 miles west of St. Louis, was officially opened on that date, and the Osage Indians signed a treaty with the Americans written by Governor Meriwether Lewis.

Fort Osage, intended as a citadel for the opening of the great American West, was also to function as a trading post for the Osage Nation. It was President Jefferson's hope that Fort Osage and other fort-trading posts would not only keep peace on the frontier but would also begin a new era in relations between Native Americans and the United States. For a short time, the fort did provide the Osage with a place to trade their furs. It also offered them limited protection from the many other tribes who were their enemies. However, the Osage chiefs discovered very quickly that the fort was small consolation for the lands they had given up by signing the treaty.

In this well-written and very readable work, Kristie C. Wolferman traces the history of the Osage Nation from its origins to its forced departure from Missouri. She demonstrates the ways in which the Osage culture changed with each new encounter of the Osage with Europeans. The Osage had already experienced many contacts with the white man before Fort Osage came to be. They had encountered French trader-trappers, explorers, missionaries, Spanish administrators, and early settlers. Their lives had been changed by the influx of white disease, by the use of European trade goods and weapons, and by the political control of Spanish, French, and American governments. As a result, the Fort Osage experiment came too late to establish lasting good relations between the white men and the Indians.

The Osage in Missouri suggests that the white men could never understand the Osage way of life, nor the Osage the white men's way. But Osage culture, greatly altered by Europeans and Americans, would never be the same again. The Osage would be forced to sacrifice most of their traditions and beliefs, as well as their homeland, on the way to becoming "civilized."

Kristie C. Wolferman, a Kansas City historian and teacher, is also the author of The Nelson-Atkins Museum of Art: Culture Comes to Kansas City.