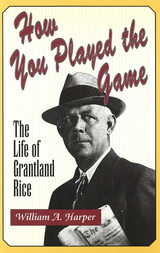 Centering around the life and times of the revered American sportswriter Grantland Rice (1880-1954), How You Played the Game takes us back to those magical days of sporting tales and mythic heroes. Through Rice's eyes we behold such sports as bicycle racing, boxing, golf, baseball, football, and tennis as they were played before 1950. We witness ups and downs in the careers of such legendary figures as Christy Mathewson, Jack Dempsey, Ty Cobb, Babe Ruth, Jim Thorpe, Red Grange, Bobby Jones, Bill Tilden, Notre Dame's Four Horsemen, Gene Tunney, and Babe Didrikson--all of whom Rice helped become household names.

Grantland Rice was a remarkably gifted and honorable sportswriter. From his early days in Nashville and Atlanta, to his famed years in New York, Rice was acknowledged by all for his uncanny grasp of the ins and outs of a dozen sports, as well as his personal friendship with hundreds of sportsmen and sportswomen. As a pioneer in American sportswriting, Rice helped establish and dignify the profession, sitting shoulder to shoulder in press boxes around the nation with the likes of Ring Lardner, Damon Runyon, Heywood Broun, and Red Smith.

Besides being a first-rate reporter, Rice was also a columnist, poet, magazine and book writer, film producer, family man, war veteran, fund-raiser, and skillful golfer. His personal accomplishments over a half century as an advocate for sports and good sportsmanship are astounding by any standard. What truly set Rice apart from so many of his peers, however, was the idea behind his sports reporting and writing. He believed that good sportsmanship was capable of lifting individuals, societies, and even nations to remarkable heights of moral and social action.

More than just a biography of Grantland Rice, How You Played the Game is about the rise of American sports and the early days of those who created the art and craft of sportswriting. Exploring the life of a man who perfectly blended journalism and sporting culture, this book is sure to appeal to all, sports lovers or not.