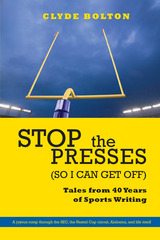 Stop the Presses (So I Can Get Off): Tales from Forty Years of Sports Writing
by Clyde Bolton
University of Alabama Press, 2005
Paper: 978-0-8173-5252-3
For 31 years, Clyde Bolton wrote four sports columns per week for the Birmingham News. By his estimation, this makes him the most widely read Alabamian in history. He may be right.
In Stop the Presses (So I Can Get Off) he takes the reader along on a joyride through more than three decades of Alabama sports. Unsurprisingly, tales of Bear Bryant and Shug Jordan, Roll Tide and War Eagle, dominate, but at one point or another, Clyde covered just about every type of sporting event in the state. Personalities and events from the realms of high school sports, minor league baseball, college basketball, and Nextel Cup Racing are just some of the many facets of his personal and professional life that he shares in this, his 17th book.
In relating the outlines of his life, Bolton pays homage to his mentors, including famed sports editor Benny Marshall, and shares some insights he’s gained after a lifetime in the newspaper game. But throughout the book, he never forgets that any good journalist—any good writer—is in the business of telling stories. And oh, what stories!
Bolton writes of meeting Michael Jordan during the basketball star’s year with the Birmingham Barons; of having dinner with Muhammad Ali at the Lambda Chi Alpha fraternity house at Auburn University; of walking incognito down sunny Birmingham sidewalks with Hall-of-Famer Johnny Unitas. He explains why Bear Bryant, in his opinion, is the greatest football coach ever, tells of interviewing Joe Namath in the men’s bathroom, and reveals why his grandmother watched professional wrestling on her hands and knees on the floor in front of the television.
Stop the Presses (So I Can Get Off) is a joyous romp through the SEC, the Nextel Cup Circuit, and, in the end, life itself.

AUTHOR BIOGRAPHY
Clyde Bolton is an award-winning journalist and three-time Alabama Sports Columnist of the Year (1988, 1992, and 1999). The author of numerous books, most recently the novelTurn Left on Green, Bolton retired from the Birmingham News in 2001, the same year he was inducted into the Alabama Sports Writers Hall of Fame. He lives in Trussville where he and his wife, Sandra, recently celebrated their fiftieth anniversary.
REVIEWS
"I loved reading Clyde Bolton's articles.  He was always factual, sometimes funny, never violated a trust, and always wrote what he thought needed to be said." --Gene Stallings
— -


"For those who think writing sports must be a cool way to make a living, here's ample proof.  Legendary Alabama sportswriter Clyde Bolton has been almost everywhere and seen almost everything in a career spanning nearly half a century, and these tales from the inner circles of sport will drive a fan wild with envy."  --Paul Hemphill, author of Lost in the Lights— -

“Imagine yourself sitting on a front porch swing with a superb storyteller who has lived a long and interesting life. Imagine that the story teller has brushed shoulders with virtually every major athletic figure to come from Alabama in the past half century. Imagine listening as one after another Bear Bryant, Shug Jordan, Bobby and Donnie Allison come alive again, though in ways you never heard before. If you can imagine all that, and if you like what you imagine, purchase Clyde Bolton’s book, Stop the Presses (So I Can Get Off): Tales from Forty Years of Sportswriting. Storytelling about sports simply doesn’t get any better than this.”--Wayne Flynt, author of Alabama in the Twentieth Century