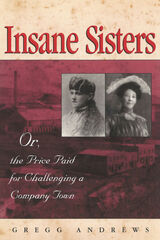 In 1903, Atlas built a plant on the border of the small community of Ilasco, located just outside Hannibal—home of the infamous cave popularized in Mark Twain's most acclaimed novels. The rich and powerful Atlas quickly appointed itself as caretaker of Twain's heritage and sought to take control of Ilasco. However, its authority was challenged in 1910 when Heinbach inherited her husband's tract of land that formed much of the unincorporated town site. On grounds that Heinbach's husband had been in the advanced stages of alcoholism when she married him the year before, some of Ilasco's political leaders and others who had ties to Atlas challenged the will, charging Heinbach with undue influence.

To help fight against the local lawyers and politicians who wanted Atlas to own the land, Heinbach enlisted the help of her shrewd and combative sister, Euphemia Koller, by making her co-owner of the tract. In a complex case that went to the Missouri Supreme Court four times, the sisters fiercely sought to hang on to the tract. However, in 1921 the county probate court imposed a guardianship over Heinbach and a circuit judge ordered a sheriff's sale of the property. After Atlas purchased the tract, Koller waged a lonely battle to overturn the sale and expose the political conspiracies that had led to Ilasco's conversion into a company town. Her efforts ultimately resulted in her court- ordered confinement in 1927 to Missouri's State Hospital Number One for the Insane, where she remained until her death at age sixty-eight.

Insane Sisters traces the dire consequences the sisters suffered and provides a fascinating look at how the intersection of gender, class, and law shaped the history and politics of Ilasco. The book also sheds valuable new light on the wider consolidation of corporate capitalism and the use of guardianships and insanity to punish unconventional women in the early twentieth century.

Gregg Andrews was born in Hannibal, Missouri, and grew up in Ilasco. A Professor of History at Southwest Texas State University in San Marcos, he is the author of City of Dust: A Cement Company Town in the Land of Tom Sawyer.