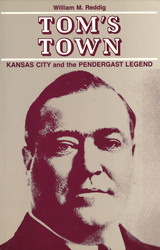 The Pendergast machine rose to power riding the industrial and business boom of the 1920s, strengthened its grip during the chaos of the depression years, and grew fat and arrogant during the spending spree that followed.  It fell apart in a fantastic series of crimes, including voting fraud and tax evasion, that shocked the nation and resulted in the incarceration of Tom Pendergast in a federal prison in 1939.  Now available in paperback with a foreword by Charles Glaab, William M. Reddig's political and social history of Kansas City from the mid-1800s to 1945, focusing on the lives of Alderman Jim Pendergast and especially his younger sibling, Big Tom Pendergast, chronicles both the influence of the brothers on the growing metropolitan area and the national phenomenon of bossism.

"The story of the Pendergasts has been told ... in many places and in many ways.  It has hardly been told anywhere, however, with more fascinating detail and healthy irony than in this volume of William M. Reddig." --New York Times

"Reddig has written his history of the Pendergast machine in a reportorial style which manages to combine plain city desk prose with a great deal of humor, irony, and insight.  He has dwelt with obvious delight on the local characters, the factions, and feuds, and has given several brilliant personality sketches." --Saturday Review of Literature

William M. Reddig, an editor for the Kansas City Star for more than 20 years, eventually becoming book review editor, completed Tom's Town shortly after the death of Tom Pendergast in 1945. He later became editor of the Charlotte News in North Carolina.