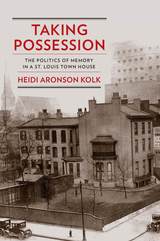 West of downtown St. Louis sits an 1851 town house that bears no obvious relationship to the monumental architecture, trendy condominiums, and sports stadia of its surroundings. Originally the residence of a fur-trade tycoon and now the Campbell House Museum, the house has been subject to energetic preservation and heritage work for some 130 years.

In Taking Possession, Heidi Aronson Kolk explores the complex and sometimes contradictory motivations for safeguarding the house as a site of public memory. Crafting narratives about the past that comforted business elites and white middle-class patrons, museum promoters assuaged concerns about the city's most pressing problems, including racial and economic inequality, segregation and privatization, and the legacies of violence for which St. Louis has been known since Ferguson. Kolk's case study illuminates the processes by which civic pride and cultural solidarity have been manufactured in a fragmented and turbulent city, showing how closely linked are acts of memory and forgetting, nostalgia and shame.
AUTHOR BIOGRAPHY
HEIDI ARONSON KOLK is assistant professor in the Sam Fox School of Design and Visual Arts and assistant vice provost of academic assessment at Washington University in St. Louis.
REVIEWS
<P>Kolk's prose is sharp and often elegant; herÂ work provides scholars and museum professionals with a model for probing the connection between artifacts andÂ public memory.</P> <P>With a wide range of sources and well-crafted narratives, Kolk makes a significant contribution to public history by establishing the individual house museum as a rich and substantial primary source.</P>