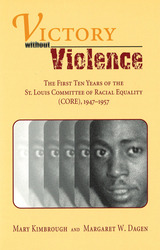 Victory without Violence is the story of a small, integrated group of St. Louisans who carried out sustained campaigns from 1947 to 1957 that were among the earliest in the nation to end racial segregation in public accommodations. Guided by Gandhian principles of nonviolent direct action, the St. Louis Committee of Racial Equality (CORE) conducted negotiations, demonstrations, and sit-ins to secure full rights for the African American residents of St. Louis.

The book opens with an overview of post-World War II racial injustice in the United States and in St. Louis. After recounting the genesis of St. Louis CORE, the writers vividly relate activities at lunch counters, cafeterias, and restaurants, demonstrating CORE's remarkable success in winning over initially hostile owners, manager, and service employees. A detailed review of its sixteen-month campaign at a major St. Louis department store, Stix, Baer & Fuller, illustrates the groups' patient persistence. Kimbrough and Dagen show after the passage of a public accommodations ordinance in 1961, CORE's goal of equal access was realized throughout the city of St. Louis.

On the scene reports drawn from CORE newsletters (1951-1955) and reminiscences by members appear throughout the text. In a closing chapter, the authors trace the lasting effects of the CORE experience on the lives of its members. Victory without Violence casts light on a previously obscured decade in St. Louis civil rights history.

Mary Kimbrough is the author of the award-winning Behind the Headlines: Stories about People and Events which Shaped St. Louis by G. Duncan Bauman as told to Mary Kimbrough and 125 Years of Caring: A History of Family and Children's Service of Greater St. Louis, 1860-1985.

Margaret W. Dagen is a cofounder, with her late husband, Irvin Dagen, of St. Louis CORE.