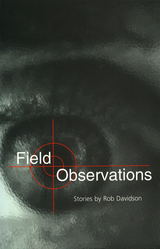 Field Observations, the debut fiction collection from Rob Davidson, contains stories about people who find themselves at difficult turning points in their lives—times when they are faced with hard choices, broken promises, and the fear of self-destruction. Davidson's characters are diverse: a retired math teacher, an auto repair worker, a technical writer, a nurse living overseas. What connects them is the way Davidson renders each character with essential human dignity, regardless of his or her flaws. This collection addresses such contemporary concerns as love relationships, cultural interaction, divorce, aging, and alcoholism in a lively, sometimes offbeat way.

In "Inventory"—winner of a 1997 AWP Intro Journals Award—the young narrator, fresh out of the army, struggles to take stock of his civilian life and assume responsibility for himself. An estranged wife, in "You Have to Say Something," competes for attention with her husband's manic approach to work, finding both solace and frustration in a new friend, a compulsive gift-giver. "A Private Life" renders a young Peace Corps volunteer grappling with her loneliness in a foreign country, with a sense of exposure and violation. In "What We Leave Behind," a college dropout and onetime golf prodigy finds himself dissatisfied with his current career as a vacuum cleaner salesman; after a quirky encounter with a client, he finds hope for a new beginning.

A recurrent motif in the stories is the presentation of characters who either tend to observe, even spy on, others, or who have the sense that they themselves are being watched. The notion of a passive observer extends to several characters who seem to treat their own lives as subject for observation rather than action, frequently persisting in patterns of behavior that are clearly destructive.

Rob Davidson is Instructor of English at Purdue University in West Lafayette, Indiana.