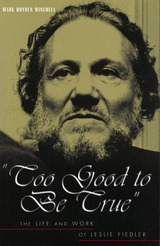 “Too Good to Be True” is a comprehensive account of Leslie Fiedler’s life and work. Born in 1917, Fiedler has, in a sense, had four overlapping careers. He first came to prominence as one of the premier Jewish intellectuals of the postwar era—writing on literature, culture, and politics in such magazines as Partisan Review and Commentary. Shortly thereafter, he helped lead the attack that myth criticism was mounting on the hegemony of the New Criticism. If he had stopped writing entirely at that point, Fiedler would still be remembered as an important cultural critic of the fifties.

With his brash, groundbreaking magnum opus, Love and Death in the American Novel, Fiedler next established himself as a revolutionary interpreter of our native literary tradition. Subsequent critics of American literature have been compelled to adopt or attack his positions because to ignore them has been impossible.

Finally, Fiedler was one of the first critics to proclaim the death of modernism and to suggest some of the directions that literature might take in its aftermath. The Oxford English Dictionary credits him with being the first individual to apply the term postmodernism to literature. This alone caused much enmity among those who had built their careers on the assumption that modernism would last forever.

To many academics, Fiedler’s lack of solemnity and his wild flights of imagination have made him appear amateurish. How could anyone who enjoys himself that much possibly be taken seriously? One of the favorite critics of young people and non-English majors, Fiedler has seemed to enjoy remaining disreputable—even as some of his once-controversial views have been made a part of standard or traditional scholarship. Like Huck Finn, returned to the raft from the fog, he often seems “too good to be true.”

Mark Royden Winchell has made his subject come alive in a highly intelligent and critical way. A combination of biography, critical analysis, and cultural history, “Too Good to Be True” will be of great interest to scholars and students of American literature, twentieth-century literary criticism, and popular culture.
AUTHOR BIOGRAPHY
Mark Royden Winchell is Professor of English and Director of the Great Works of Western Civilization program at Clemson University. He is the author or editor of numerous books, including Where No Flag Flies: Donald Davidson and the Southern Resistance (University of Missouri Press).
TABLE OF CONTENTS