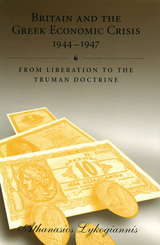 Britainand the Greek Economic Crisis, 1944–1947 concentrates on Anglo-Greek interactions in economic matters during the political and economic turmoil between the Axis occupation of Greece and the Greek civil war. By analyzing the Greek crisis primarily in economic terms, Athanasios Lykogiannis avoids the political partisanship that has colored much previous writing on the subject and throws light on many issues neglected by earlier authors. Drawing on a range of untapped British, American, and Greek archival sources, as well as extensive secondary sources, the author examines the interplay of political and economic factors, such as the ingrained polarization of Greek society and the weakness and timidity of the country’s governments, that aggravated and prolonged the crisis.
Lykogiannis critically examines Greece’s policies, and the actors behind them, and assesses the British involvement in the episode: the quality of the measures recommended to the Greeks, the constraints facing British advisers in the country, and the reasons for the ultimate failure of British intervention. He also compares the two periods of western tutelage of Greece: the British and the American, from the announcement of the Truman Doctrine to the inauguration of the European Recovery Program.
Britain and the Greek Economic Crisis, 1944–1947 argues that even if the Germans were to blame for the conditions that led to hyperinflation, the mediocre results of successive attempts to stabilize the economy were caused by internal factors such as the fiscal ineptitude of the postwar Greek governments and their ignorance of, and hostility toward, any form of economic management. Whereas many have blamed foreign intervention for prolonging the crisis, Lykogiannis makes clear that the decisions of successive Greek governments were far more significant. His book demonstrates how firmly the crisis of post-liberation Greece was rooted in the country’s political, economic, and social past.
AUTHOR BIOGRAPHY
Athanasios Lykogiannis is Special Adviser on Historical Issues and Archives at the Bank of Greece in Athens. He has a standing interest in Greek economic affairs and is currently conducting research on the history of the Bank of Greece.