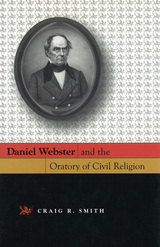 Daniel Webster (1782–1852) embodied the golden age of oratory in America by mastering each of the major genres of public speaking of the time. Even today, many of his victories before the Supreme Court remain as precedents. Webster served in the House, the Senate, and twice as secretary of state. He was so famous as a political orator that his reply “Liberty and Union, now and forever, one and inseparable!” to Senator Robert Hayne in a debate in 1830 was memorized by schoolboys and was on the lips of Northern soldiers as they charged forward in the Civil War. There would have been no 1850 Compromise without Webster, and without the Compromise, the Civil War might well have come earlier to an unprepared North.
Webster was also the consummate ceremonial speaker. He advanced Whig virtues and solidified support for the Union through civil religion, creating a transcendent symbol for the nation that became a metaphor for the working constitutional framework.
While several biographies have been written about Webster, none has focused on his oratorical talent. This study examines Webster’s incredible career from the perspective of his great speeches and how they created a civil religion that moved citizens beyond loyalty and civic virtue to true romantic patriotism. Craig R. Smith places Webster’s speeches in their historical context and then uses the tools of rhetorical criticism to analyze them. He demonstrates that Webster understood not only how rhetorical genres function to meet the expectations of the moment but also how they could be braided to produce long-lasting and literate discourse.
AUTHOR BIOGRAPHY
Craig R. Smith is Professor of Communication Studies at California State University, Long Beach, where he directs the Center for First Amendment Studies. He has served as a consultant to CBS News for convention, election night, and inaugural coverage, and he was a full-time speechwriter for President Gerald R. Ford. He is the author or coauthor of many books, including The Four Freedoms of the First Amendment.
TABLE OF CONTENTS