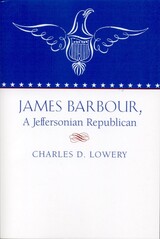 Barbour, a Virginia contemporary of Thomas Jefferson and James Madison, during a long public career spanning the years 1798-1842, exerted a constructive influence on the nation’s history. Active in state and national politics during the formative decades of the republic, Barbour was a political nationalist who grafted to the dominant political philosophy of the day those elements of the Hamiltonian Federalist creed necessary for governing a dynamic, changing nation.

Barbour’s life affords a unique vantage point for viewing party politics in the South and the nation during the Jeffersonian and Jacksonian periods, for understanding Jeffersonian Republicanism, and for comprehending the difficulties a Southern agrarian had in embracing the economic and political realities at the dawn of the modern commercial age.