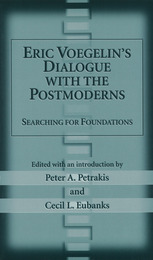 This collection of essays endeavors to generate a dialogue between Eric Voegelin and other prominent twentieth-century thinkers and explore some of the more perplexing issues in contemporary political theory. Each essay rests on the underlying question: is it possible or desirable to construct or discover political foundations without resorting to metaphysical or essentialist constructs? The introduction focuses on the two nineteenth-century thinkers, Nietzsche and Husserl, who have framed the debate about modernity and postmodernity; thereafter, the book examines Voegelin's ideas as compared to those of other twentieth-century thinkers.

Discussed within the volume are Levinas and the precedence of ethics, Ricoeur's theory of narrative representation, Deleuze and the philosophy of immanence, Voegelin's relationship to a speech- dimension theory of human behavior, and Patocka's theory of pre- metaphysical transcendence in Socrates. What will impress scholars most about this collection is the provocative dialogue created between Voegelin and other major thinkers of postmodernism that addresses the issue of establishing foundations without foundationalism.

AUTHOR BIOGRAPHY
About the Editors
Peter A. Petrakis is Associate Professor of History and Political Science at Southeastern Louisiana State University in Hammond.
Cecil L. Eubanks is Alumni Professor of Political Science at Louisiana State University in Baton Rouge. He is the author of Marx and Engels: An Analytical Bibliography.
TABLE OF CONTENTS