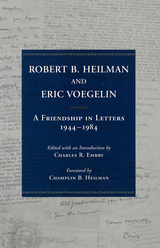 This collection of letters exchanged between Robert B. Heilman and Eric Voegelin records a friendship that lasted more than forty years. These scholars, both giants in their own fields, shared news of family and events, academic gossip, personal and professional vicissitudes, academic successes, and, most important, ideas.
Heilman and Voegelin first became acquainted around 1941, when Voegelin delivered a guest lecture for the political science department at Louisiana State University. At that time, Heilman was teaching in the English department at LSU along with Robert Penn Warren and Cleanth Brooks. What began as simple exchanges after Voegelin moved to LSU soon grew into full-fledged correspondence—beginning with an eight-page letter by Voegelin commenting on Heilman’s manuscripton Shakespeare’s King Lear. Their correspondence lasted until four months before Voegelin’s death in January 1985.
These letters represent Voegelin’s most prolonged correspondence with a native-born American scholar and provide readers with an insight into Voegelin as a literary critic. While Voegelin’s analysis of Henry James’s The Turn of the Screw is well known, these letters reveal the context from which the analysis grew. Additional comments by Voegelin on Mann, Eliot, Shakespeare, Homer, Proust, Flaubert, and other significant writers are uncovered throughout his exchanges with Heilman.
Readers will appreciate not only Heilman’s elegant style but also his efforts to clarify for himself the meaning and implications of Voegelin’s developing philosophy. Heilman’s questions are often ones that readers of Voegelin continue to ask today. In his queries, as well as in the exposition of his theories of tragedy and melodrama, human nature, and expressionist drama, Heilman displays a canny perception of the philosophical issues and problems of modernity that sustained their interdisciplinary discussion. The letters exchanged by Robert B. Heilman and Eric Voegelin demonstrate the warm friendship these two scholars shared and illuminate many of the turns and transformations in their work as they developed as thinkers.
AUTHOR BIOGRAPHY
About the Editor
Charles R. Embry is Professor of Political Science at Texas A&M University–Commerce.
TABLE OF CONTENTS