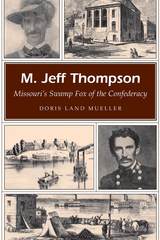 In the treacherous swamps of southeast Missouri, a different kind of Civil War was waged.

Meriwether Jeff Thompson was one of the most intriguing but least-known Missouri participants in the Civil War. He and his troops traveled fast and light to harass Union forces, materializing out of the countryside to surprise the enemy and evading the traps set for them by Northern commanders. Early in the war, Union General Ulysses S. Grant gave Thompson the name “Swamp Fox” for his exploits in the Bootheel region. This book now tells his story—an adventure that will be appreciated by readers of all ages. Doris Mueller has produced a meticulously researched account of Thompson’s life, from his Virginia boyhood and early successes to his wartime exploits and postwar life. When the war began, Thompson left his adopted city of St. Joseph—where he had served as mayor—to fight for the Confederacy. He was elected brigadier general in the First Military District of Southeast Missouri and led poorly equipped and loosely trained men in skirmishes and raids, often using guerrilla tactics. He was captured in August 1863. After being released twelve months later in a prisoner exchange, he joined Sterling Price’s ill-fated raid into Missouri. After the war, he was one of the first Southern leaders to seek reinstatement as a U.S. citizen and worked to allay hostilities among fellow Southerners.

Thompson was also known as the “Poet Laureate of the Marshes,” and Mueller includes numerous excerpts from his writings about his experiences. Her account not only provides a wealth of little-known biographical details about this important Missourian but also offers insight into the state’s unique experiences during that bloody era, personalizing events through the life of this brave soldier.

Scorned by the Northern press for impudence, but beloved as a leader by his men, Thompson was courageous in battle, often to the point of recklessness, making him a constant thorn in the side of Union forces; after the war he was an oft-maligned model for reconciliation. Doris Mueller’s recounting of his life is an action-adventure story that will delight readers as it attests to his important role in Missouri’s heritage.