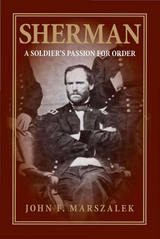 Sherman: A Soldier’s Passion for Order is the premier biography of William Tecumseh Sherman, the Civil War commander known for his “destructive war” policy against Confederates and as a consummate soldier. This updated edition of John F. Marszalek’s award-winning book presents the general as a complicated man who, fearing anarchy, searched for the order that he hoped would make his life a success.

Sherman was profoundly influenced by the death of his father and his subsequent relationship with the powerful Whig politician Thomas Ewing and his family. Although the Ewings treated Sherman as one of their own, the young Sherman was determined to make it on his own. He graduated from West Point and moved on to service at military posts throughout the South. This volume traces Sherman’s involvement in the Mexican War in the late 1840s, his years battling prospectors and deserting soldiers in gold-rush California, and his 1850 marriage to his foster sister, Ellen. Later he moved to Louisiana, and, after the state seceded, Sherman returned to the North to fight for the Union.

Sherman covers the general’s early Civil War assignments in Kentucky and Missouri and his battles against former Southern friends there, the battle at Shiloh, and his rise to become second only to Grant among the Union leadership. Sherman’s famed use of destructive war, controversial then and now, is examined in detail. The destruction of property, he believed, would convince the Confederates that surrender was their best option, and Sherman’s successful strategy became the stuff of legend.

This definitive biography, which includes forty-six illustrations, effectively refutes misconceptions surrounding the controversial Union general and presents Sherman the man, not the myth.

“A thoughtful and generally sympathetic biography of one of the Civil War’s most controversial commanders.”—USA Today

“In Sherman, John F. Marszalek has written the premier biography of the brilliant Civil War general. Based on exhaustive research, written smoothly, and argued intelligently, it easily surpasses any existing volume on William Tecumseh Sherman’s lengthy and controversial life.”—Journal of American History