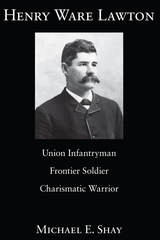 Henry Ware Lawton’s nearly four decades as a professional soldier in the U.S. Army tie his story closely to that of America in the nineteenth century, from the Civil War to the settlement of the West, to the experiment with empire. Lawton served the country nearly uninterrupted from the day he enlisted at age 18—soon after Lincoln’s first call for volunteers to fight in the Civil War, where he earned a Medal of Honor—to his death at age 56, a major general in the Philippine War. In between, he fought in the Spanish-American War and the Indian Wars; during that time he rose to national prominence as the man who captured Geronimo.