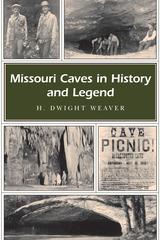 Missouri has been likened to a “cave factory” because its limestone bedrock can be slowly dissolved by groundwater to form caverns, and the state boasts more than six thousand caves in an unbelievable variety of sizes, lengths, and shapes. Dwight Weaver has been fascinated by Missouri’s caves since boyhood and now distills a lifetime of exploration and research in a book that will equally fascinate readers of all ages.

Missouri Caves in History and Legend records a cultural heritage stretching from the end of the ice age to the twenty-first century.  In a grand tour of the state’s darkest places, Weaver takes readers deep underground to shed light on the historical significance of caves, correct misinformation about them, and describe the ways in which people have used and abused these resources.

Weaver tells how these underground places have enriched our knowledge of extinct animals and early Native Americans. He explores the early uses of caves: for the mining of saltpeter, onyx, and guano; as sources of water; for cold storage; and as livestock shelters. And he tells how caves were used for burial sites and moonshine stills, as hideouts for Civil War soldiers and outlaws—revealing how Jesse James became associated with Missouri caves—and even as venues for underground dance parties in the late nineteenth century.

Bringing caves into the modern era, Weaver relates the history of Missouri’s “show caves” over a hundred years—from the opening of Mark Twain Cave in 1886 to that of Onyx Mountain Caverns in 1990—and tells of the men and women who played a major role in expanding the state’s tourism industry. He also tracks the hunt for the buried treasure and uranium ore that have captivated cave explorers, documents the emergence of organized caving, and explains how caves now play a role in wildlife management by providing a sanctuary for endangered bats and other creatures.

Included in the book is an overview of cave resources in twelve regions, covering all the counties that currently have recorded caves, as well as a superb selection of photos from the author’s extensive collection, depicting the history and natural features of these underground wonders. Missouri Caves in History and Legend is a riveting account that marks an important contribution to the state’s heritage and brings this world of darkness into the light of day.

AUTHOR BIOGRAPHY
Former show cave operator H. Dwight Weaver is the author of nine books, including Wilderness Underground: Caves of the Ozark Plateau, also published by the University of Missouri Press, and most recently History and Geography of Lake of the Ozarks. He lives near Eldon, Missouri.
TABLE OF CONTENTS