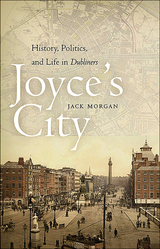 In 1914, James Joyce published Dubliners, a collection of short stories depicting life in Dublin at the turn of the century. One hundred years later, readers and critics alike continue to return to this book, Joyce's first major work. One of these critics is Jack Morgan, whose study Joyce’s Cityoffers refreshing readings on the occasion of the Dubliners centennial.
Joyce’s City examines these now classic stories, a number of which are regarded as without equal in English literature, in terms of their historical and political contexts and often from markedly original perspectives. Morgan demonstrates, for example, the influence of American literature on “The Dead”--notably Washington Irving’s influence—and also traces the rich vein of Gothicism prevalent in Joyce’s work from Dubliners through Ulysses.
While evidencing copious research and extensive literary knowledge, Joyce’s City is set forth with a clarity that makes it as pleasurable to read as it is informative.
AUTHOR BIOGRAPHY

Jack Morgan is Emeritus Research Professor of English at Missouri University of Science and Technology. He is the author or editor of four books, including most recently New World Irish: One Hundred Years of Lives and Letters in American Culture, which was awarded the American Conference for Irish-Studies Michael J. Durkin Prize.Morgan lives in Winsted, Connecticut.