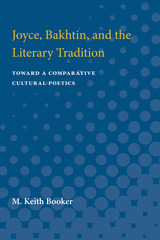 Literary studies of James Joyce, perhaps more so than those of any other author, have been enriched by important developments in literary theory in the last twenty-five years. Noting a curious gap in this scholarship, M. Keith Booker brings the work of Mikhail Bakhtin, unquestionably one of the most important literary theorists of this century, to bear on Joyce's relationship to six of his literary predecessors. In clear and readable prose, Booker explores Joyce's dialogues not only with Homer, Dante, and Shakespeare, his three most obvious predecessors, but with Rabelais, Goethe, and Dostoevsky, three literary figures important in Bakhtin's theoretical work.
These six writers provide the opportunity to examine Joyce's work with regard to several of Bakhtin's most important concepts. If Homer represents the authority of epic, Rabelais represents for Bakhtin the subversive multivocal energies of carnivalesque genres. As opposed to his description of Dante's attempts to escape from historicity, Bakhtin figures Goethe as the epitome of engagement with the temporality of everyday history. And Bakhtin's generic denial of polyphony in the works of Shakespeare contrasts with Bakhtin's identification of Dostoevsky as the most polyphonic writer in all the world of literature.
Together, Booker's comparative readings suggest a Joyce whose works are politically committed, historically engaged, and socially relevant. In short, they suggest a Joyce whose work differs radically from conventional notions of modernist literature as culturally elitist, historically detached, and more interested in individual psychology than in social reality.
M. Keith Booker is Professor of English, University of Arkansas.
REQUEST ACCESSIBLE FILE