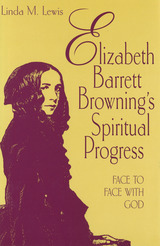 Elizabeth Barrett Browning believed that "Christ's religion is essentially poetry—poetry glorified." In Elizabeth Barrett Browning's Spiritual Progress, Linda M. Lewis studies Browning's religion as poetry, her poetry as religion. The book interprets Browning's literary life as an arduous spiritual quest—the successive stages being a rejection of Promethean pride for Christ-like humility, affirmation of the gospels of suffering and of work, internalization of the doctrine of Apocalypse, and ascent to divine love and truth.

Lewis follows this religious crusade from the poet's childhood to her posthumous Last Poems--including such topics as her Bible reading, her introduction to the Greek church fathers and the English Protestant reformers, the theological debates in which she participated, her quarrel with the theology of Paradise Lost, and her scandalous involvement in mesmerism and Swedenborgianism. Using insights from contemporary feminist thought, Lewis argues that Browning's religious assumptions and insights range from the conventional to the iconoclastic and that women's spirituality is, for Browning as well as for other Victorian women writers, separate from orthodox patriarchy. Lewis demonstrates that Browning's political and social ideology--often labeled inconsistent and illogical—really makes sense in light of this spiritual quest, which leads her to confront her God "face to face."

Elizabeth Barrett Browning's Spiritual Progress examines not only Browning's most admired works, such as Sonnets from the Portuguese and Aurora Leigh, but also her large body of political works and her important early poems—The Seraphim and A Drama of Exile. This intertextual book compares Browning's ideology to that of feminists such as Margaret Fuller, Harriet Martineau, and Florence Nightingale; influential conservatives such as Thomas Carlyle; and those most esteemed of Victorian poets, Alfred Lord Tennyson and Robert Browning.

Concluding with an examination of religion as a central focus of Victorian women poets, Lewis clarifies the ways in which Browning differs from Christina Rossetti, Felicia Hemans, Dora Greenwell, Jean Ingelow, and Mary Howitt. Elizabeth Barrett Browning's Spiritual Progress maintains that Browning's peculiar face-to-face struggle with the patristic and poetic tradition—as well as with God—sets her work apart.

Linda M. Lewis, professor emerita of Bethany College, Lindsborg, Kansas, is the author of four books on British literature, all published by the University of Missouri Press. Titles are: The Promethean Politics of Milton, Blake, and Shelley (1992), Elizabeth Barrett Browning's Spiritual Progress: Face to Face with God (1998), Germaine de Staël, George Sand, and the Victorian Woman Artist (2003), and Dickens, His Parables, and His Readers (2011). She has published a number of articles, most of them on British authors. Most recently, she served as an editor of The Brownings' Correspondence, volume 24 (2016), and she has an article on rhetorical and linguistic devices of Dickens's Martin Chuzzlewit in Dickens Studies Annual (2016).