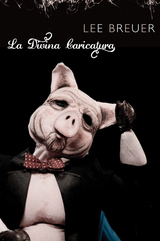 BUY
La Divina Caricatura: Bunraku Meets Motown
by Lee Breuer
Seagull Books, 2018
Paper: 978-0-85742-557-7
eISBN: 978-0-85742-566-9
This unique book is a graphic novel and performance poem, a mixed-media musical cartoon, an animated feature film come to life. Lee Breuer’s La Divina Caricatura is in the pataphysical tradition of Alfred Jarry—if Jarry had been a Dante fan. In this play we meet unforgettable characters: Rose the Dog, who thinks she is a woman; her lover John, a junkie filmmaker; Ponzi Porco, PhD, a pig in love with the New York Times; and the Warrior Ant, who, to impress his father, Trotsky the Termite, declares the “perpetual revolution” of the bugs of the fifth world. Each a soul on its own pilgrimage, seldom with a Virgil or a Beatrice to guide them, they often try to guide each other, only to get more lost. A dazzling, comic, potent mix of ideas and character, invention and reality, the plays in La Divina Caricatura reinvigorate the stage for our time.
AUTHOR BIOGRAPHY
Lee Breuer is a playwright, director, and founding artistic director of Mabou Mines Theater in New York.