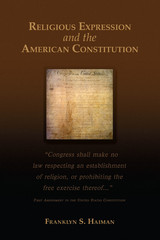 First Amendment rights have been among the most fiercely debated topics in the aftermath of 9/11. In the current environment and fervor for “homeland security,” personal freedoms in exchange for security are coming under more scrutiny. Among these guaranteed freedoms are the protection of religious expression given by the U.S. Constitution and the constitutional prohibitions against behaviors that violate the separation of church and state. The mandate that the government “shall make no law respecting an establishment of religion, or prohibiting the free exercise thereof” is a general principle that has guided American courts in interpreting the original intent of the First Amendment. In Religious Expression and the American Constitution, Haiman focuses on the current state of American law with respect to a broad range of controversial issues affecting religious expression, both verbal and nonverbal, along with a review of the recent history of each issue to provide a full understanding.