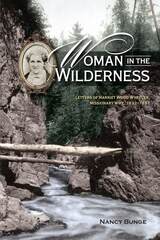 Woman in the Wilderness is a collection of letters written between 1832 and 1892 to and by an American woman, Harriet Wood Wheeler.
Harriet's letters reveal her experiences with actors and institutions that played pivotal roles in the history of American women: the nascent literate female work force at the mills in Lowell, Massachusetts; the Ipswich Female Seminary, which was one of the first schools for women teachers; women's associations, especially in churches; and the close and enduring ties that characterized women's relationships in the late nineteenth century.
Harriet's letters also provide an intimate view of the relationships between American Indians and Euro-Americans in the Great Lakes region, where she settled with her Christian missionary husband.
AUTHOR BIOGRAPHY
Nancy Bunge, a Professor of American Studies at Michigan State University, is the author of Nathaniel Hawthorne: A Study of the Short Fiction.
TABLE OF CONTENTS
Contents
Acknowledgments
Preface
The Wood/Wheeler Family
1. Preparation for the Journey
2. The Reality of Mission Life
3. Building a Home Alone in the Forest
4. Standing with the Ojibwe against Removal and Smallpox
5. Struggling against Sickness
Notes
6. Harriet’s Children
7. Life Without a Mission
Selected Bibliography
Index
REQUEST ACCESSIBLE FILE