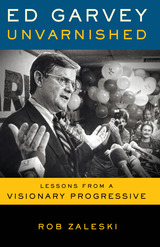 Ed Garvey (1940–2017) was one of the most influential and colorful progressive politicians in Wisconsin's history. Growing up in what was a conservative rural town, he got his first taste of liberal activism at the University of Wisconsin in the 1960s, became the first executive director of the National Football League Players' Union, led two spirited campaigns against Bob Kasten and Tommy Thompson, and eventually cofounded the Fighting Bob Fest.

Shortly before he died, Garvey expressed his views on everything in a series of detailed, no-holds-barred interviews with journalist Rob Zaleski. In his trademark witty, blunt, and often abrasive style, he offered his impressions of the political climate, worries about the environment, and Act 10 protests on Capitol Square. Garvey's candor during these conversations provides deeper insight into the personal highs and lows he experienced over his rich life. Diehard followers will fondly remember his energetic campaigns, but they may be surprised to learn of his long-simmering disappointment after those losses. Ever timely and meaningful, Garvey's words offer a path for how the Democratic Party, both within Wisconsin and nationally, can regain its soul.
AUTHOR BIOGRAPHY
Rob Zaleski is a freelance writer and award-winning columnist. He spent twenty-six years writing for The Capital Times in Madison.
TABLE OF CONTENTS