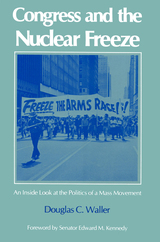 Congress and the Nuclear Freeze: An Inside Look at the Politics of a Mass Movement
by Douglas Waller
foreword by Senator Edward Kennedy
University of Massachusetts Press, 1987
Paper: 978-0-87023-560-3
Early in 1982 a group of lawmakers introduced into both houses of the U.S. Congress a resolution calling on the United States and the Soviet Union to negotiate a mutual and verifiable halt to the nuclear arms race. It was a bold measure and one that sparked intense debate between members of Congress and the White House over the conduct of U.S. arms control policy. This book is an inside account of that legislative battle, told by a congressional aide who was in the thick of it.
AUTHOR BIOGRAPHY
Douglas Waller is a veteran magazine correspondent, author and lecturer. Formerly, he was a legislative assistant to Senator William Proxmire, specializing in arms control. He was also a legislative director for Congressman Edward J. Markey, the House sponsor of the Nuclear Freeze Resolution. He is coauthor with Markey of Nuclear Peril: The Politics of Proliferation.