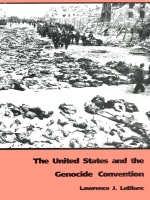 In this definitive study, Lawrence J. LeBlanc examines the nearly forty-year struggle over ratification of the Genocide Convention by the United States. LeBlanc’s analysis of the history of the convention and the issues and problems surrounding its ratification sheds important light on the process of treaty ratification in the United States and on the role of American public opinion and political culture in international human rights legislation. Drawing on case studies of genocide committed since World War II, the author also confronts the strengths and weaknesses of international adjudication as a whole.
Adopted by the United Nations General Assembly in 1948 in response to the atrocities committed by the Nazis before and during World War II, the Genocide Convention was finally made law by the United States Senate in 1988 contingent upon a series of “conditions”—known as the “Lugar-Helms-Hatch Sovereignty Package”—which, LeBlanc suggests, markedly weakened the convention. Through careful analysis of the bitter debates over ratification, LeBlanc demonstrates that much of the opposition to the convention sprang from fears that it would be used domestically as a tool by groups such as blacks and Native Americans who might hold the U.S. accountable for genocide in matters of race relations.
REQUEST ACCESSIBLE FILE