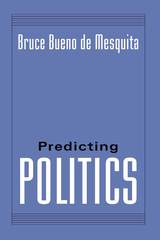 To predict likely policy developments around the world over the next thirty years, Bruce Bueno de Mesquita uses game theoretic models as described in Predicting Politics. The tools used in this book have found wide application in business and in the development of significant American foreign policy initiatives over the years. The author uses data from 1948 to show the ability of models to predict the end of the Cold War. He then turns to data from 1980 for about one hundred countries and simulates future states of the world, especially with regard to further democratization. In the process he shows strong evidence that the burst of democratization that occurred at the end of the 1980s and the beginning of the 1990s was predictable based on replicable data known in 1980. While delving into rather gloomy predictions about likely developments in Russia and China’s domestic affairs, he offers a novel explanation for the failure of Russia to attract more investment and to achieve the higher growth rates commonly associated with democratic government. Although Russia is certainly more democratic in an absolute sense today than it was in 1980, it has fallen farther behind the rest of the world in terms of democratization and so lacks the comparative advantages of property rights, rule of law, and transparent governance that are essential for attracting investment. Bueno de Mesquita shows how policy situations and game theoretical analyses can explain the past, illuminate the present and forecast future events. At the same time he provides the tools necessary for others to create their own rigorous estimates of future foreign policies.
REVIEWS
“More than any single source, this book demonstrates the explanatory and forecasting capabilities of formal models and shows the high level of what can be done with the present state of the art. A subsidiary theme is that analytic models can be used effectively to enlarge our understanding of past events. Thus previously inchoate events can be understood in a coherent way. The Concordat of Worms chapter is a brilliant example of this.” —Randolph M. Siverson