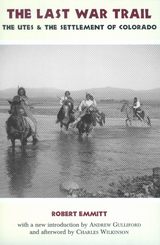 The Last War Trail: The Utes and the Settlement of Colorado
by Robert Emmitt
introduction by Andrew Gulliford
afterword by Charles Wilkinson

University Press of Colorado, 2000
Paper: 978-0-87081-540-9
Robert Emmitt's The Last War Trail: The Utes and the Settlement of Colorado is one of the most important and innovative books written on Ute Indians from Colorado. Saponise Cuch, Chief of the White River Utes, said to Robert Emmitt in 1948, "I am an old man now, and I am the only one left who remembers this. I have known that someone would come to tell this story; now you will write it out, as I have told it to you." Drawing upon historical documents, transcripts, and letters as well as interviews with Northern Ute elders, Emmitt describes the tragedy of United States Indian Agent Nathan Meeker's plan to "civilize" the Utes, and the resulting military intervention in which fifty Ute warriors held off the U.S. cavalry and killed Meeker, Major Thomas Thornburgh, and others. Ute warriors sought only to defend their families and their way of life, but the price for that defense was forced removal from Colorado and the loss of over twelve million acres. "The Utes Must Go" became a rallying cry for white settlers who coveted the lands of peaceful Utes.

Written with the care and precision of a finely crafted novel, The Last War Trail was nominated for the Pulitzer Prize when it was first published in 1954. Long out of print and now brought back with new rare photographs and illustrations, The Last War Trail will be eagerly read by anyone trying to understand conflicts of the nineteenth century between Native American and encroaching settlers.